I know it's hard.

I want you to know: I know it’s hard.

I almost forgot.  When you’re on the other side it’s convenient to forget all the heartache.  There is power in the success of just getting through, and we feed on that power.  We feed on the triumphant-cy of surviving the childhood years with diabetes.

Like childbirth, the pain isn’t remembered, but the rewards are.

Last week I took some time to look back.  I started with blog-post one and moved forward to the present day.

I forgot how intense the worry was.

I forgot how hard the nights were.

I forgot how the milestones were amplified a millions times over…because they meant so much more to us as they were worked for with full heart and mind.

There will be people out there who will tell you that you are overreacting to certain situations within your child’s diabetic life, and maybe you are…. but I’m here today to tell you that I get it.

You are going to lose sleep.

You are going to wonder, “What if.”

You are going to wish, and hope, and you are going to second-guess decisions you make because they affect the person that is the most important person in your life…

A person YOU brought into this world.  A person that you want to protect from the hurt.

And you can’t.  Because Diabetes hurts.

It’s a wicked process to go through, but one that doesn’t last forever.

If you can see, that I….Meri Schuhmacher, have been through all those same situations, and all the same worry, and have survived/is surviving…maybe it will help get you through.

Maybe it will help you to know that hard times don’t last forever and all the hard work will yield a remarkable child.

No, don’t feel bad for protecting your child.  Never feel bad for asking questions.  Never let someones eye-roll deter you. But know, there is an army of others that are doing it too, and they are doing what they think is right for their child, as you are too. And they are surviving, even thriving.

Know that all is well.

In the end it will all be ok.

The further you get from diagnosis the better you will feel.  The timeline is sure.

If I could go back in time, I wouldn’t change anything that I did.  But I would change how I felt on the inside.  If I approached every problem with the certainty that everything was going to be ok, I’m sure I would have been much calmer about it.

So if you can, take my certainty now, and make it your own.

It’s all going to be ok.

If you have to worry, than worry.  But know that all that worry is doing is raising your blood pressure. Worry is a ride on a merry-go-round, it may keep you busy but it won't get you anywhere. It won’t make the situation go away, only actions will.

I forgot how hard it was, and I’m sorry I did.

As I sit here and write, "don’t worry," I completely understand that it's easier said than done.

Having a child that doesn’t stop growing for 15 years is ridiculously difficult.  Especially when their body is unique and can’t be compared to another’s.

But even still, don't worry.

Keep on keeping on, D Mom’s and Dads.  You are appreciated, and loved.

And one day, you’ll be on the other side of it all like I am, and know…it’s all going to be ok.  Because time and experience will show you that each new episode of life is survivable.

It’s all going to be ok.

Rock on.  And if you have to, worry on.  Regardless, it's a life worth living.

An open letter to Jamie Oliver.

Sometimes we don’t know we’ve done something hurtful until someone shines a light on it.

(Hold on…let me find a flashlight…)

Generally, when something hurtful is presented, one likes to lash back with hurtful words. Tit for tat as the saying goes.  And although I’m tempted to go there, someone I love reminds me daily to, “always assume the best in people.”  So in the spirit of fairness, I'm going to go ahead and assume you just don’t know…

I assume you just don’t know that posing in front of a huge Coke bottle that says “DIABETES” is hurtful to those that have Diabetes. 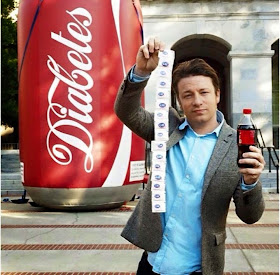 I assume that you did it as a caution to others not to overindulge in sugar because it is detrimental to the systems in our bodies.  Over indulgence can cause obesity.  And I assume that you think obesity automatically means diabetes…

That last assumption—my assumption that your assumption is that obesity automatically means diabetes—well, that's where the hurt comes in, because that is misinformation.

I assume you didn’t know that.

Obesity does not automatically mean diabetes.

Many people are obese and do not have diabetes.

Many people are thin and do have diabetes.

Coke, Twinkies and Pie do not diabetes make.

According to WHO, about 35% of the world’s population is overweight and of that 35%, about 11% is obese.

According to the IDF, about 7% of the worlds population has diabetes.

Insinuating that being overweight automatically means diabetes is misleading.

But as long as we define diabetes as “SUGAR” or “FATNESS” we assign shame with the disease.  Once that is established, people hide their condition…and neglect happens. And we all know neglect is never ever (ever!) a good thing.

This is what’s happening, Jamie.  Today, people have walked into their doctor’s offices and been diagnosed with Diabetes.  Their doctors have told them it is all their fault, and in turn sent their patients away telling them to fix it or else (insert a terrible number of threats here.)  Saying diabetes is their fault is just the same as telling a depressed person it is their fault.  “Why don’t you just leave and be happy?”  Is the very same as “Why don’t you just leave and lose weight.”

Instead.  “You’re fat.  You are sickening.  Your feet are going to fall off if you don’t lose weight.” (Doctor’s may not say this outright, but let me tell you…a lot of times that is what patients hear.)

Standing in front of a Coke can and calling it Diabetes with a smug look on your face is degrading.  You are humiliating those that have Diabetes.  And for why?  To encourage people to get healthy?

Scare tactics do not encourage.  Ever.

Scare tactics do not motivate.  Ever.

I know your heart is in the right place.  I know you are on a mission to help.  But what you’ve done isn’t help, in fact, it can only be defined as mean.

My son saw your picture.  He is 17.  He has Type 1 Diabetes, also known to the world as just “diabetes.”  His is autoimmune, but that is beside the point.  You gave him the message that his diabetes is caused by too much sugar.

His friends saw that picture and you also gave them the message that his diabetes is caused by too much sugar.

There are so many factors to Diabetes it isn’t fair to put a blanket “FAT” definition behind it.  It’s flat out misinformation.

And please watch this:

I wholeheartedly agree--excess sugar isn't good for our bodies.  It for sure can be part of the story, but it FOR SURE isn't the entire story.  Your picture infers that a lot of Coke leads to Diabetes. We can't pretend we have the answers when we don't.  And as Peter says, "What if some our most fundamental ideas about obesity are just wrong? I can't afford the luxury of arrogance anymore, let alone the arrogance of certainty."

The more you know…